The .243 Win. was originally a wildcat designed by Warren Page who necked down the .308 case in the early fifties. The goal was to make a light deer rifle which would still have the advantages of the high-velocity .22-calibers for varmint hunting. In 1955 Winchester made it a commercial round. The .243 is a very popular round all over the world for hunting medium sized game, probably due to its flat trajectory and very mild recoil. Surprisingly enough its popularity never reached the same degree when it comes to varmint hunting in spite of the .243” bullets better wind-bucking capabilities.

For hunting edible birds and fox the full metal jacketed bullets will do a much better job than the equivalent bullets in .22-caliber does.

There are no reviews yet.

FREE PARKING IS AVAILABLE IN THE ADJOINING SIDE STREETS 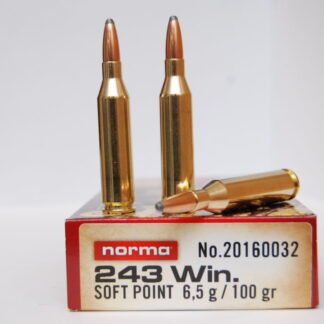