In rifle cartridges, these bullets are highly recommended when good expansion and deep penetration in medium and heavy game are required at short to medium ranges. These bullets give pinpoint accuracy because of their short lengths for their weights. This short length for a given weight allows a rifle barrel to stabilise a considerably heavier round-nose bullet than would be possible with a Spitzer-pointed bullet of the same weight, which would be considerably longer. If the shots are fast and at short ranges or the game is big and dangerous, these are the bullets to choose. The 150 grain #2135 is ideal for quick shots at whitetails or smaller black bears in heavy cover.

In handguns, these bullets should be considered non expanding in game at normal handgun velocities. They may prove useful in situations where a heavy bullet is needed but twist rate is marginally slow, such as Handgun Silhouettes where momentum is more important than expansion. The shorter length for a given weight of each of these bullets, compared to longer Spitzer-shaped bullets of the same weights, may provide superior stability and accuracy in some handguns.
.200 @ 2700 fps and above
.227 between 2700 and 1700 fps
.270 @ 1700 fps and below
box of 100
part no:#2135 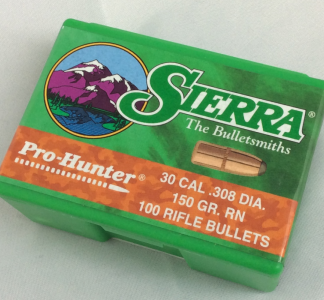